Castle Island is one of those places that’s on every “Things To Do In Boston With Kids” and “Family Fun in Boston” lists and was also just mentioned by my friend Maryann yesterday (post your list in the comments for me, Maryann!), so it was a good last minute choice today when I realized I had no plan. I was also worried it was gonna be kind of lame, as most of those cliché list items are. But, it turned out to be pretty sweet.

First of all, dogs are allowed and welcome, so Beatz got to come. [Side note: If anyone knows what to do about car anxiety in dogs, please let me know. Beatz has started panting excessively in the car, only on longer trips. She never used to mind the car before. The air conditioning is on, and she had plenty of water before we left.] She had a blast walking around the fort (I refuse to call it a castle), sniffing, and saying hi to other dogs. 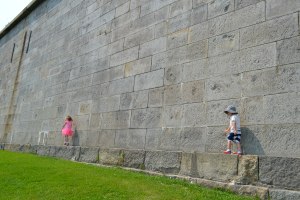 Secondly, there’s a nice little walk around the non-castle, although we couldn’t figure out how/if you can get inside. I convinced the kids that one concrete slab was a magic door that you had to stand in front of and yell, “Castle Island!” to activate the magic portal, which they did (the yelling, not the activating the magic portal). The fact that they’ll still do this stuff is exactly why I thought this was the right time to take the summer off with them.

After our hike (and I use that term very generously), we went to the really nice Castle Island playground, where Hazy showed off her guns by going across the monkey bars about five or six times, and George watched in admiration. Then, I showed off my guns by doing some dual swing pushing, which, according to my internet research, burns 200 calories an hour. I have a short attention span for swing pushing though, so I probably only burned 20 calories.

Then we had a picnic on the beach (which Beatz had to watch forlornly from beneath a nearby bench), and played in the ice cold water.

I did my best to ignore my crippling fear of jellyfish and the cries of,  “jellyfish!” all around us.  We continued making progress in Project Water Comfort and made less progress on Project Abandon Swimmies, despite what it might look like in the photo.

Then, I went for the Best Mom Ever award by getting us ice cream. If you’re wondering how much ice cream it’s possible to drip onto your camo shorts, it’s 9/10th of a Sullivan’s Oreo Cookie Razzle, and George can demonstrate his technique.

After our outing, George napped and Hazy and I made zucchini brownies (not quite Fruity Penguins, JoAnne!).

Then we played in our inflatable pool, and by “we”, I mean Hazy and George did in between time outs, while I drank a shandy.

Tomorrow, we’re winging it. Quick – give me some ideas in the comment section! Wednesday, we’re hanging with Oma & Opa, and Thursday, we’re having lunch with my friend Christine and her adorable baby, Jack. Maybe George can teach Jack how to coat himself in ice cream!

11 thoughts on “Castle Island isn’t really a castle nor an island. Discuss amongst yourselves.”