We took a vacation during our vacation, which I know seems excessive, but Matty found a deal on a cheapy place in Maine, and we needed some full-family time.

You already know we love the beach, but Old Orchard Beach is more than a beach. It’s also an orchard. Just kidding. But there is a super cheesy amusement park, mini golf, two candy stores, an ice cream shop on every block, and a store we walked by every day that had a rhinestone BOSS necklace. In other words, the OOB is a cheesy paradise.

Side story: both kids have decided they want to be pilots when they grow up. George wants to fly a “Delta” and Hazy wants to fly a “jet.” I told them it’d be cool if they were copilots on the same flight and talked about the announcement they could make from the cockpit. Then George proclaimed, “I’m gonna be a pilot! I’ll need a microphone and an airplane.” Yes, Burgles, in that order. 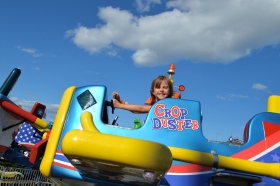 Also, I had lobster 17 ways, plus fried dough. #MERCA

We didn’t think it could get any better than a family vacation (with special guest star, my niece, Cassidy, no less) in this gorgeous vacationland, but then I got a FB message from my cousin, Elaine. Turns out they were in Maine too. Is there a squealing emoji? Because insert that here. So, we got to have a beach (and ice cream and pizza) day with “the cousins”, Elaine, her husband Eric, and kids Matya and Isaac, who are either my second cousins or cousins once removed, or kid-cousins. I’m never quite sure.

We did some boogie boarding, even George! (See him?) 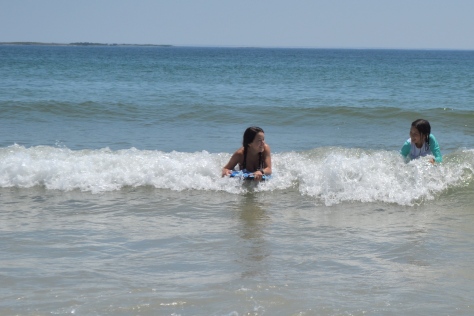 By the way, on the last day, I asked Cassidy to stop by the cheesy jewelry store and buy the BOSS necklace for Matty. It had just been sold. Whoever you are, where you are, BOSS, wear it proudly.