There’s something to be said for spending one-on-one time with your kids. That’s why I’m so grateful for Grammy (and Auntie Dita and Uncle Matt) for taking each of my kids for a few days. This week, it was George’s turn, much to his delight. On Wednesday morning, the day he was going to Grammy’s, George woke up a half hour early, explaining, “I have a big day ahead of me!”.

I dropped G off at Grammy while Hazy was at Tenacity (tennis & literacy camp, of course) and then it was GIRL TIME.

After she’d had her fill of both tennis and literacy, we headed down to Oma and Opa’s. As it was girl time, we listened to the Dork Diaries CD in the car (OMG!). And since it was pouring out, we didn’t bother with the pond, pool or beach. Instead, we went back to school shopping. I was remiss in taking any photos, but the most important thing to know is that the piece de resistance was a t-shirt that says, “Taters gonna tate.” Hazy, Oma and I have very different tastes (glitter/sequins, mom stuff, hodgepodge, respectively), but somehow we made it work. Let’s just say there were a lot of adjustments made the night before the final runway show.

Then, we had Oma & Opa’s won tons ALL TO OURSELVES, which is a very dangerous proposition indeed. Hazy put away 14, a new personal best. 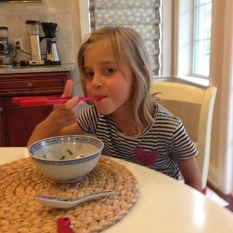 You’d think after having fifths, she’d be full, but she is my daughter, so she had ice cream for dessert. Just like her mom.