Ordinary people spend their summer days going swimming, eating hot dogs, and not minding wearing pants. But we’re not ordinary people. No, we’re fancy people who like to while away the hours appreciating art and exploring the world of science and at least one of us frowns upon wearing anything besides underwear on his bottom half. That’s why, on Thursday, we spent our morning at the library acting as rocket scientists and our afternoon at a museum. I even got George to wear pants, or at least, not take off his pajama pants.

First, we returned about 40 books to the library.

Then, we got our nerdery on at a Museum of Science sponsored activity at the library where we made our own “rockets” and shot them into “outer space”, and also (successfully) attempted to parachute a mini-astronaut back through the Earth’s atmosphere. 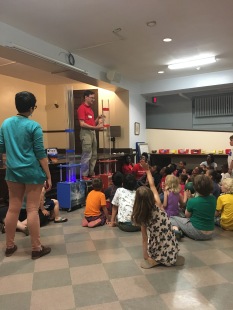 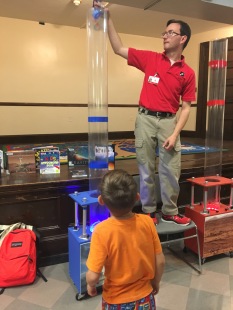 Because it was a fancy day, we had our lunch al fresco.  Two butterflies kept flying by, which I like to think is the kids’ Grandpa George and my grandpa, Dada, fluttering by to say hello. Hi!

Since George insisted he DOESN’T NEED A NAP anymore, we headed straight to the museum after lunch.

Granted, the museum was the Children’s Museum, which is basically a giant playground, but we did plenty of learning.

If our selfie game is any indication of how the summer will go, it’s going to be a good one.

Later, we did a quick grocery stop where I lost the children briefly in the toilet paper aisle (as one does) and George combined his love of Star Wars with his OCD by lining up all the groceries and announcing, “all lined up like they’re doing the Imperial March!” 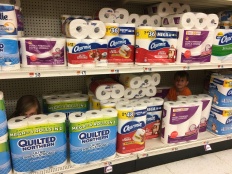 Then, last but not least, we celebrated Matty’s birthday and flatulence with his favorite kind of cake, ice cream cake!

If you’d like to sign up to be a special guest star on One Summer At Home, you may do so in the comments. Upcoming planned activities include: Wingaersheek Beach, the Lawn on D, Revere Beach Sand Sculpting Festival, and reviving our Bags for the Homeless program.

2 thoughts on “A Highfalutin Day of Science & Culture”