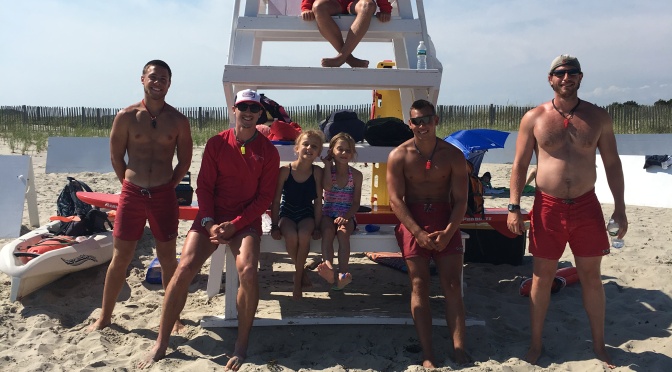 Just kidding, the worst thing we did was whine a little too much (George) and eat too much chicken parm (another one of us, name’s aren’t important). Yesterday, we kept it rocking in the city, city of (Little) Compton with our good friends Nina, Jack and Dee. Nina’s around Hazy’s age, Jack’s around George’s age, and Dee’s around my age, so it was like a triple play date. 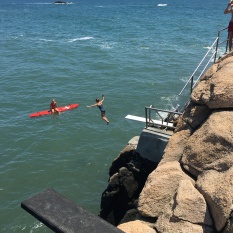 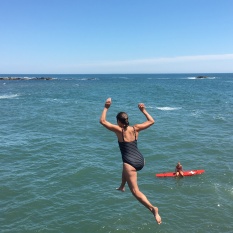 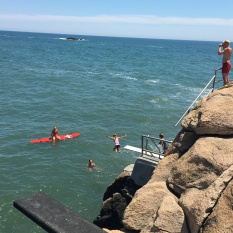 I’m so proud of Nina & Hazy for jumping off the diving board, and slightly less proud of the ice cream weight I’ve put on this summer. I’m totally gonna quit tomorrow.

Hazy stubbed and cut her toe and went to the lifeguard stand to get it cleaned out/bandaged. We did not realize she’d have an entire lifeguard medical team, including one in short shorts.

After I whipped George with a towel under the guise of “cleaning off the sand”, we headed back to Dee’s for outdoor showers and then went to the lovely Commons Lunch for dinner, because we’re rule-benders like that.

And then, because we’re ice creamaholics, we went for ice cream.

About our shirts: I bought the kids and Matty these for Father’s Day. Incidentally, we just saw the Sandlot (for the first time for me and the kids) on Friday night, so now they’re really into it and the shirts. Yesterday morning, they wore them to surprise Matty, so he put his on too.

I’m thinking of making myself a shirt that says “SERENITY NOW!”