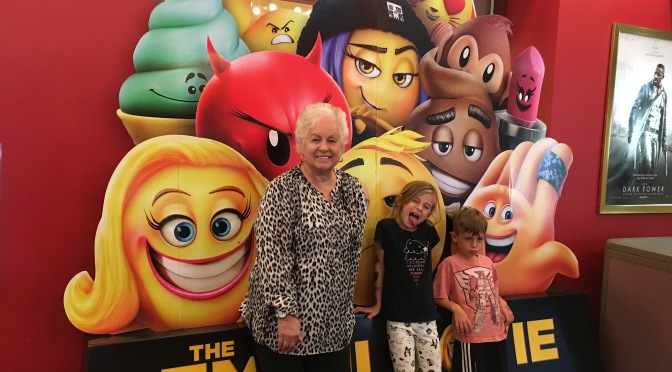 Yesterday, we hung with Grammy at our house. Due to reasons beyond my control (rain, lack of planning skills), we didn’t really have the most robust plan. No worries, I’ve got plenty of things in my bag of tricks.

Personally, I love puzzles. I’m working on one right now. It has 1,000 pieces and it’s got puppies. Judge away, Judge Judy McJudgerson, but puppy puzzle + rosé + Netflix = my idea of a great evening. So, I was thrilled when the kids brought up their new set of five 150-piece Star Wars holographic puzzles.

I was slightly less than thrilled when I found out they had accidentally mixed all five puzzles’ pieces together and pretty much all the pieces fit together, even if they’re not the right ones. Also, fun fact: black holographic pieces all look exactly the same.

This is when I encourage the kids to play with each other without me. This is when I take some me-time to kick Brian H’s ass at Words With Friends.

This is when I encourage (force) my kids to have some quiet time in their rooms after they’ve gotten into an idiotic fight about something like who looked at whom’s sticker book without permission, who is or is not the boss of whom, and who told whom they didn’t like them and other things I couldn’t care less about. Also, your move, Brian H.

In my case, Grammy. She’ll play any game and she’s up for anything. I’m pretty sure if we said we’re going to go rob a bank, she’d be like, “We can use my handicap placard to park the getaway car right out front.” God bless you, Grammy.

5. Bring on the long board games

I’m talking your Lifes and your Monopolies. Grammy hates Monopoly, but she still played, because, see #4. And bonus, the only jail time is imaginary.

6. The preparing and eating of snacks

You know what you never think is that good in theory but then is indescribably good in practice? Pirate’s Booty. Discuss amongst yourselves.

Preferably in the theater, because duh, drive time. We saw Despicable Me 3, which was exactly as good as you’d expect it to be. (Way better than Secret Life of Pets, way worse than Moana) I laughed out loud a few times, which is more than I can say for The Sweetest Thing.

My kids, especially Hazy, have blown up Skechers in their minds as the be-all, end-all of shoe stores. It’s their Manolo Blahnik.

That is, if Manolo Blahnik designed high top sneakers that appear to have had Shimmer & Shine barf all over them.

This is how I imagine the Skechers designers’ presentation go. “So, it’ll just have sparkles on the tongue, sequins on the toe, emojis, cartoon foods and catch phrases on the sides, and a patch? Is that enough though?” “Of course not. Those sequins will light up.” “Add a conversation heart plus sunglasses on the pineapple and we have something.”

In a raw display of my iron strong Mom Power, I walked out of that place with ZERO SHOES PURCHASED. Saying no is a good mom’s secret weapon. (Please forget I said this when I buy Hazy a pair of Skechers in a couple of weeks.)

Special thanks to Grammy. I couldn’t have done it without you (literally).