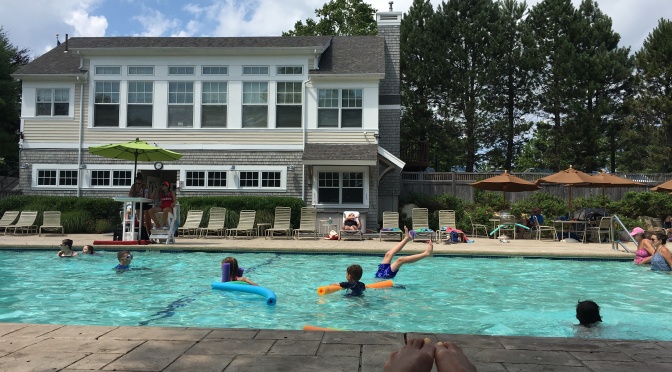 Today was a big pool day at Oma and Opa’s. In previous summers, George took a nap mid-afternoon, so we’d only go to the pool from about 3-5. But now, we head to the pool right after lunch and stay as long as “we” want.

We got to the pool at about 12:30 and the kids jumped right in and didn’t get out, except for bathroom breaks, for the next two and a half hours. I forgot to get a photo of their little prune toes.

At one point, I drifted asleep and woke up to the sounds of Marco Polo and my mom laughing. I thought my kids had joined in on a pool-wide game of Marco Polo, but later found out that they were just the aceholes yelling, “Polo!” and hanging around Marco even though they weren’t actually playing.

Don’t worry, Oma and I got into the pool some too.

While the kids were forced to get out of the pool during Adult Swim, I performed a water ballet for them, consisting of dolphin dives, somersaults, front handsprings, swimming while waving, and a few Mary Lou Retton-esque finishes where I would stand up straight with my hands in the air. I expected wild applause when I finished, but Hazy told me I needed more practice, and George gave me a score of 100 … out of 200. Thanks for not sugar coating it, guys.

I’d like to conclude with this exchange George and I had this morning:

George: I’ve been waiting for this moment to arrive.

George: Three days in a row of good manners.

Me: I’ve been waiting for that moment too.

George: Well, it’s not going to happen today. You want it to, but it’s not.