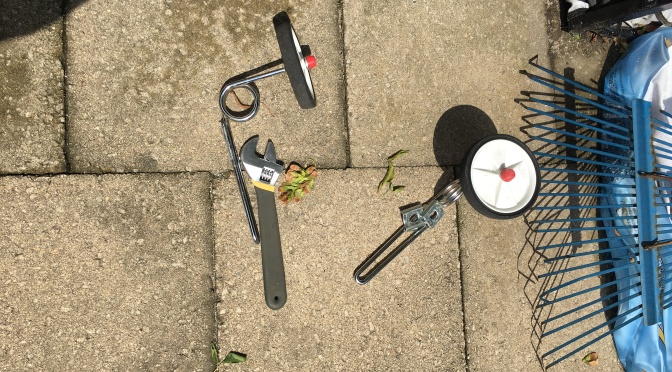 You thought this was gonna be another OSAH disaster story, didn’t you? Surprise, this one’s a triumph (with mini-disasters sprinkled throughout, because come on, we’re still us).

Thursday morning I woke up, plan-less, and had a vision. The vision was one of walking a quarter mile in the 110% humidity with two whining children, crying about whacking their own calves with their bike pedals. Just kidding, I’m not psychic. The vision was teaching my kids to ride their bikes without training wheels before college.

We did it! Of course, first we had to walk the bikes for a quarter mile through 110% humidity at an 11/10 on the Whine Scale. A weaker woman would have crumbled.

The actual teaching-them-to-ride part was easy; they both got it on the first try. I did the classic holding onto the seat, “I won’t let go until you’re ready” and “I’m going to count to three and then let go.”  George would do this thing where he’d go, “I’m not comfortable yet! I’m not comfortable yet!” and then start counting when he was.

The hard part was that it was 80 million degrees out plus humidity and also that I had foolishly decided that I would run my daily mile while the kids biked around the track. Because it turns out that while both kids could ride like champs once I got them started, they were like the Greatest American Hero (Remember Ralph? Anyone? Anyone?) and couldn’t land/stop without injuring themselves. So I would run a 1/4 mile, and then have to start someone up, or sympathize with boo boos, or attempt to put Hazy’s chain back on her bike. I’m sweating, people are crying (possibly me), there’s whining. It was an s-word show. But both kids can now ride a two-wheeler, so I’m calling it a win.

Because it was so hot out, we then headed to the pool.

Just when we thought it couldn’t get any better at the pool since the time we saw a grumpy lady get hit in the back of the head with a flying Spiderman figurine, we had an even more exciting incident. We discovered that George can stand in the shallow end! The Mirabella pool shallow end is notoriously deep, so deep in fact, that George always has to wear a life vest when we go swimming there. But not anymore…

As if we hadn’t had enough excitement already (Riding on two wheels! Standing in the shallow end! Almost breaking Mama!), we also caught the elusive Banana Train on the way home.

We rode it and then waited about ten minutes for it to leave so we could watch the whole train go by, because we (2/3 of us) are into that kind of thing.

How could we possibly top Thursday? Hint: guest stars.

One thought on “Then The Wheels Came Off”