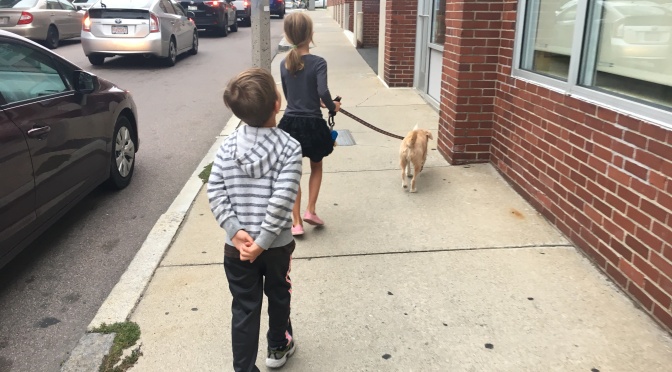 On Tuesday and Wednesday, we mainly focused on Rosie. We took her to the vet, where she was an exemplary patient, took her on lots of walks and introduced her to new doggy friends, and we brought her to Pet Cabaret (which had significantly fewer musical numbers than you might expect), where we bought her a new harness and some yummy treats. Fun fact: Rosie’s treats cost more than mine, and I’m the sucker who buys the cookies they sample at Whole Foods. We also ordered her a Death Star ID tag, which should get here next week. 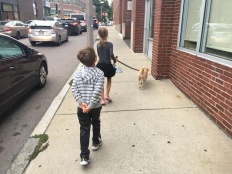 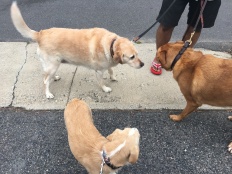 I’d like to pretend we stayed home exclusively due to my doting dog parenting style, but it was also because there was wayyyy too much arguing on the way to the Aquarium. (Side note: Never, ever drive to the Aquarium. The parking garage is really expensive and it’s almost impossible to find street parking and then you end up driving around for an hour while your kids fight about things you’ve since blocked out but they definitely resulted in you blasting Pink’s “So What” on the radio so you could drown them out.) I told the kids if they kept arguing incessantly, then I wasn’t going to reward them with any fun adventures. So I showed them. Besides our dog errands, we stayed home and cleaned all day. All this winning is exhausting.

Speaking of winning, on Wednesday, Hazy and I started off with some light Monopoly.

Then, it was a special Dad Camp while I had to take care of some work-related stuff. (What? Gross, I know.) Later, we went to our pool, where the kids played with some old and new friends and had ice cream #4008 of the summer.

Just 30 days until both kids are back in school. Not that anyone’s counting.

2 thoughts on “Actually, We Can Stop”