They say it takes a village to raise a child, and thank God, the universe, and nachos for mine. Last week, my parents watched the kids while we went to Paris, and today, we invited ourselves over to Grammy’s for a day of fun. It was action-packed with all kinds of awesomeness, and Grammy (and Auntie Dita, Uncle Matt, RyRy, and Sean-O) kept them occupied and happy all day.

After a few threats of “I will turn this car around!”, which I’ll admit, I got a small thrill out of it, we made it to New Hampshire. Side note: if you’ve never been stuck in bumpah to bumpah traffic with an anxiety ridden dog and two kids singing, “Down By The Bay” at high decibels, while suffering from carcolepsy, well, you aren’t missing much. Be grateful for the things you have in your life.

First, we went to the splash pad. The splash pad is zero times the cost of Disney World, and gives my kids approximately an equal, if not greater, amount of joy. It’s in Derry NH if you ever want to save $2,000.

After exhausting ourselves at the splash pad, we headed to Grammy’s house for some quiet time.

As George skipped his much-needed nap, I decided the best thing to do was put the pedal to the medal and go for complete exhaustion.

You’d think they’d be exhausted by now, but turns out they’re never too exhausted to abuse Uncle Matt.

We were going to go to Free Fun Friday at the Children’s Museum tomorrow, until I put down my crack pipe and realized that was a completely insane idea. So, who knows what we’ll do? But it’s a holiday, so I have some back up, thank God/the universe/nachos.

Quick poll – if you end up getting home late (over an hour and a half past bedtime), and your kids are dead asleep in their car seats, do you:

a) carry them to their rooms, take off their shoes, and put them to bed

b) wake them up gently, have them brush (and floss, for bonus points) their teeth, change into jammies, and then put them to bed

c) carry them inside, attempt to brush their teeth while they sleep, put them to bed

d) some other option I haven’t thought of

Just kidding, I’m barely hanging on. But we had 100% fewer time outs today, so that’s a start. The kids slept in until 8 (whining takes a lot out of you), and then we went to Michael’s to get some of Hazy’s art framed. The great thing about Michael’s is that there are 300 things that kids love there; the bad thing about is that they want you to buy them all 300 things.

After Michael’s (and after my free birthday burger from B. Good – shout out, Westside!), it was nap time for George and crafts time for Hazy and me. Crafts are, how do you say, not my specialty, so we usually default to multimedia collages using my old US Weeklys. [Hazy’s thoughts on Kim & Kanye: “I like them, but I don’t like their names. Let’s call them Rose & Brady.”]

After naps, we went to the JP library for Superhero costume making. The description said ages 6+, but I figured George was old enough. Who says a 3 1/2 year old can’t cut out eye holes for a mask, glue on tiny jewels, and cut out stars? I do. I say that. The librarian was very impressed with Hazy’s superhero name, Rainbow Dash, and I didn’t have the heart to tell her that it came from a My Little Pony coloring book.

We capped off the night with special guest star, Ajit, who got treated to a hip hop show. We use the term hip hop very, very loosely.

It’s never good when someone’s already been in two time outs by 10 am (cough, cough, George), but we got back on course by the afternoon. Today, we: • wrote apology notes to Oma and Opa for being turds (Sample content: “Sorry we were bad to you.”). • had a picnic on our front lawn (PB&Js for the kids, Wegman’s sushi for me, and shockingly, no wine was consumed). • took Beatz to the dog park, where she promptly lay down in the shade. • went to the Franklin Park Zoo where we saw gorillas, a mandrill, tigers, butterflies, and a bunny (see if you can spot it in the flower photo). We spent the bulk of our zoo time at our favorite exhibit, the playground. • built a Magnatile hotel and fought over the trains 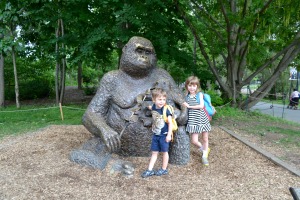 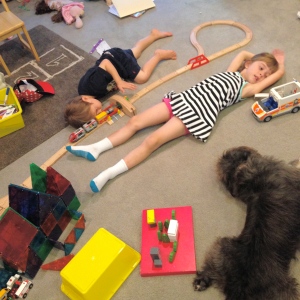 Pending the status of Double Secret Probation, we will do some more fun stuff tomorrow.

Okay, I haven’t actually started my leave yet, but I’d like to share this hopefully-not-prophetic imagined entry by my buddy/Words with Friends frenemy, Brian Heidebrecht:

entry, day #1:
i am the luckiest mom ever! this summer is going to be incredible. i have so many things planned and the children will be thrilled to have me home and available to fill their days with love & activities!!!!!!!

entry, day #2:
oh. my. god. what on EARTH was i thinking????? how can it not be time for school to start up again? it feels like it’s been 3 months already! it’s SO HOT and they are SO NEEDY. how many popsicles do i need to give them just to get TWO SECONDS of quiet time? and where the hell is matty? he said he’d be home by now. where’s the margarita mix? this is going to be a long ass summer…

Note to self: Stock up on popsicles and tequila.

The Official Summer Off hasn’t started yet (it’ll start June 30th), but here’s what’s on the agenda so far:

Thank you for all the suggestions so far. Keep ’em coming!

People ask me this question all the time: when I’m going back for seconds, when I’m grabbing the karaoke microphone, when I’m picking a fight with a large angry woman in line for the bus at Atlantic City at 1 am, and now, when I’m taking the summer off of work.

The short answer is, I’m taking two months off from being a working mom to be a stay-at-home mom. It’s like a maternity leave, but without a newborn. 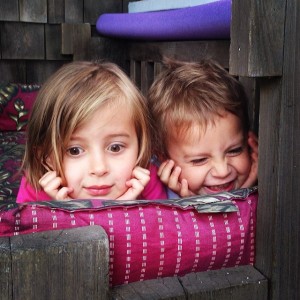 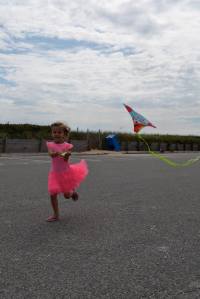 Here’s where I’ll keep track of all the fun. If you can think of anything that should be on our must-do list, please leave me a comment.