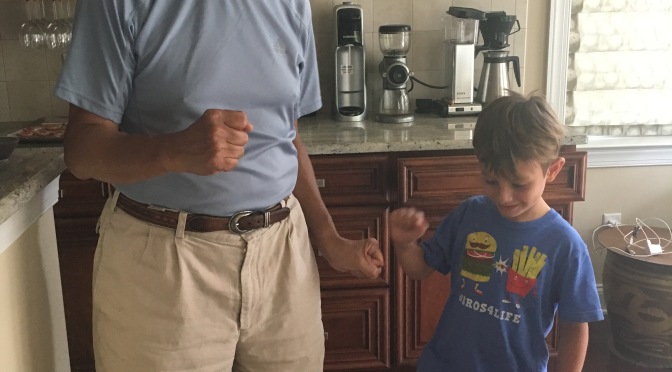 My kids are blessed in many ways (see: our summer ice cream count), but especially in that they have two grandmothers and a grandfather whom they get to see frequently. This week, we were lucky enough to see Grammy on Tuesday and Oma & Opa on Wednesday (with special bonus Skype with my grandmother, Nana, speaking of lucky). I feel so fortunate to have family nearby to help. When you’re taking care of people/turds all day every day, it’s such a gift to have someone else take care of you.

On Tuesday, we spent the day lounging by/in/around the pool with Grammy. The pool is cool, clean, stocked with rafts and toys, and we’re almost always the only ones there.

I had to get some work done, and I couldn’t have picked a nicer home office.

As if it wasn’t enough that Grammy entertained the kids while I worked and made them their favorite lunches, she also made me this restaurant-worthy salad.

Grammy had an event to get to, so we left before dinner. At home, the kids helped me make my semi-famous tofu and rice. George mainly wore this cute outfit and pressed down the rice cooker button; Hazy learned to smash garlic and cut the ginger. (She still had a slightly swollen face, so was not ready for face photos.) I’d show you more, but it’s a secret family recipe. (Rest assured, magnesium is not an ingredient.) 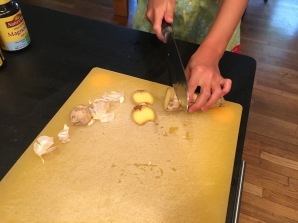 Wednesday, we headed down to Oma & Opa’s. We spent the morning at the pond, which we had all to ourselves for a little while.

We enjoyed swimming, digging holes, modeling the tubes, and fighting/crying over who got to put their tube in the backseat first and whose had to be jammed in second. All equally fun activities! Next time we might play “Imma Shank Your Tube With a Pen And See Who’s Crying.” Just an idea, could be fun.

Apparently, a few weeks ago, George called my dad “brah.” If you know my dad, this is hilarious. He’s just not a “brah” type; he’s not even a “bro” type. But, Opa took it in stride, and asked George if “brah” was short for “broccolini,” and now that is George and Opa’s nickname for each other. So, naturally George wore his “#BROS4LIFE” shirt and he and Opa recreated it.

Also, Oma has been branching out and making her crack cookies for non-family members, despite my strong objections. However, this time we were cool with it, because she used the extra dough to make us this batch.

Usually, Oma goes on our excursions with us, but on this day, my fur-brother, Teddy, was sick, so Oma had to stay home with him. So we headed to the beach solo in the afternoon. White Horse is an awesome beach, except for its dubious water conditions. There was a ton of reddish seaweed in the water, and also a lot of it semi-dried up on the beach. I say semi-dried up, because when you walk on it, your foot sinks down like you’re walking in spoiled chocolate pudding with a thin crab-scented creme brulée crust. Even typing up that description makes me cringe. I wore my flip flops to walk down to the water, and it was still gross.

Once you’re past the crab pudding section, it’s actually quite nice. There’s a sandy beach and while there’s lots of reddish seaweed in the water, it’s quite dispersed and you don’t really feel it.

The sand was perfect for making sand castles, sand sea turtles, or you know, a classic sand toilet. Hazy was very proud of her sand toilet, complete with plumbing that opened up to a tank in the back.

The kids enjoyed burying each other in rocks and finding a bunch of “special” rocks to add to their collections. These special rocks, by the way, get added to the Mac Wagon, which I have to painstakingly drag through the sand back to the car. This is why I limit them to one cupful. 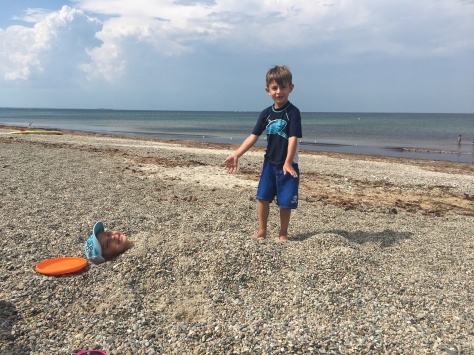 We capped off a great day with spaghetti and homemade meatballs, followed by – what else? – ice cream. Then we had our Skype session with Nana, my 100-year old grandmother and undisputed Cutest Person On Earth, and my wonderful Auntie Julie (“Auntie Juju”). George spent the entire session trying to fill the camera lens with his eye.

Thank you, Grammy, Oma, Opa, Nana and Auntie Juju, for reminding us how incredibly lucky we are.

School’s out for…70 days, but who’s counting? Yesterday was the kids’ last (half) day of school. I glued on Mac’ the Mac wagon’s new eyes, packed him up with towels, sunblock, assorted swim masks, bathing suits, and a cute little mini wallet with just the essentials (license, $20 snack bar money, Charlie card, JP Licks card), and lugged him out the door. His eyes fell off before I made it out the front gate, so I did what any good surgeon would and left them on the kitchen counter, glue side up. Then I hauled Mac 1.6 miles to the kids’ school and arrived right at 12:30 on the dot.

I found a new trick to make them smile in photos. “The person with the biggest smile gets extra ice cream!” Check out the results: 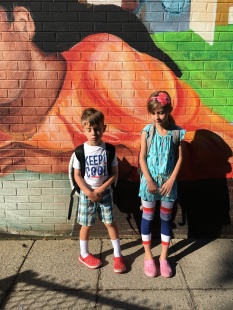 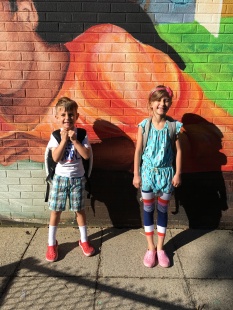 Between my promptness and my new photo trick, I was feeling pretty proud of myself, especially as we headed towards JP Licks for our Summer Kick Off Sundaes and everyone we passed admired Mac, even without his sparkly eyes.

Then I realized I left the pool passes at home. Let us take this moment to whatever-the-modern-equivalent-of-raising-the-roof is for my nephew, Ryan. He picked up my Bat signal and dropped everything to hand deliver the pool passes and save me from about two miles of whilking (whine-walking) back home and then to the train station. It takes a village, guys.

Bellies full of ice cream and mini wallet full of pool passes, we headed to the train station, stopping only at our awesome local bookstore with a less than awesome name, Papercuts, per Hazy’s request. George immediately accosted the woman who works there, “WHERE ARE YOUR STAR WARS BOOKS?” like we were robbing a bank.

Fortunately, she stayed calm and opened the safe/found the one Star Wars book. I did not buy it, because I’m a Mick Jagger parent. You can’t always get what you want.

It was a beautiful day for the pool. I love the walk through the North End; it’s pretty and it’s short enough that there’s minimal whining. There are a few narrow sidewalks, where groups of people insist on taking up the whole thing, but luckily I had George acting as my Fezzik, only instead of “EVERYBODY MOVE!”, he’d go, “Excuse me! Wagon coming through!”

We swam, had snacks, played frisbee (read: narrowly avoided whacking various people in the head with the frisbee), and took a brief break at the playground to warm up.

It was a really good day, and it became a great day when we were talking back to the T and passed this golden retriever with a party hat on, BECAUSE IT WAS HIS BIRTHDAY. Happy birthday, buddy!

I don’t know about you, but I plan on treating the rest of summer like it’s that doggy in the birthday hat and celebrating the crap out of it.

*It’s just 50 miles away and not technically ours.

Once again, we were spoiled by Grammy. Gorgeous pool, poolside lunch, two hours of quiet time for me while G napped, and a delicious dinner that ended with Hoodsies. Plus, we had some special guest stars, RyRy and Sean-O.

After hearing some nightmare mother-in-law stories from some of my friends, I consider myself even more lucky to have Grammy. She always goes all out to make sure we have a great time. Today, this was just what I needed. I’m about 75% strength, and it was so nice to be able to lie down for two hours midday and to have someone make me lunch and dinner.

If you have any ideas for future adventures, please let me know in the comments section. Today, my friend Anna suggested we take the Downeaster to Maine (Upeaster?) for some ME time, and my friend Leslie, now a fellow stay-at-home in NH, suggested a beach day . Check and check.