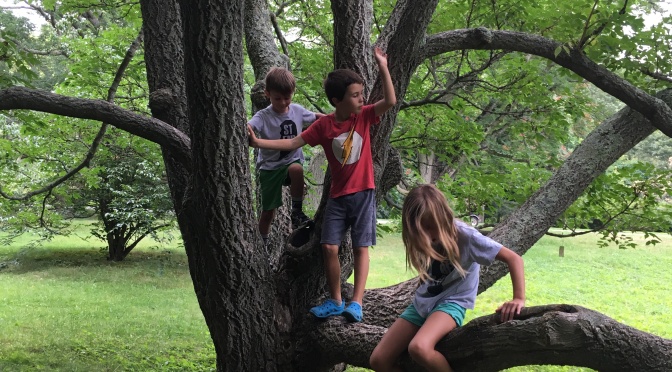 On Tuesday, as you may recall, we were ready to have our date with the Campions. But as the Campions had to fit in all their favorite Boston things (Ice cream! Playgrounds! More ice cream!) in a week’s visit, they had a justifiably jam-packed schedule. So first, we did Baby Pool/Giant Bubble Redux with Dee, Nina & Jack.

While I filled up the pool, Hazy & George filmed a spy movie.

Don’t worry, the giant bubble crockpot was still in action.

PSA: Don’t leave your real camera unattended with kids around. They all think they’re professional photographers.

We concluded Play Date #1 with a picnic lunch.

Then we hosed off the kids and headed to…

PLAY DATE #2: ADVENTURE IN THE ARBORETUM

Avid OSAH readers (I heart you, Nina and Ashley!) might recall that we did Discovery Backpacks at the arboretum two years ago. Well, we went to meet the Campions at the arboretum (their only instructions, “Bring balls! #BALLS”) and my kids also remembered about the backpacks, so we picked one up from the lady at the main building. 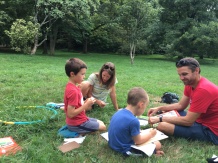 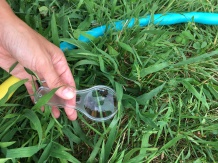 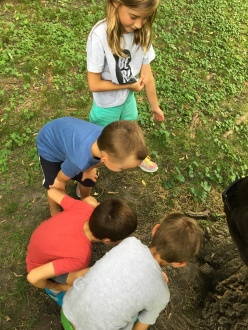 Seriously though, they were fun. They give you a set of little cards with different things to find.We found almost everything except a juice box and a salamander, but not for lack of trying. The kids even spotted a tiny snake, which is what they’re all looking at in the photo above.

We also had some fun climbing trees until we got busted by a park ranger. Pshaw. When I was a kid, we’d climb all the trees and break all the arms and no one gave a damn. We didn’t even have those fancy colored casts! 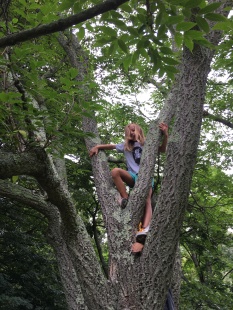 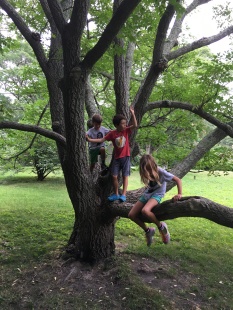 You didn’t think I forgot about the #BALLS, did you? After we’d had our way with nature, we played a game of Spud. (I totally forgot that’s what it’s called and just googled “playground game throw ball in the air and call a number.” But that’s a much less catchy name than Spud.) We didn’t remember all the rules, but we played a modified version of what we could remember from Maryann, Kevin and I’s combined childhoods and it was awesome. Then when we were all sweaty and tired and Rosie was emotionally exhausted from watching her mom run away from her repeatedly, we got – what else? – ice cream. (Cross JP Licks off your list, Campions.)

In case you needed convincing, here were some of the outtakes (click on them to view them full size): 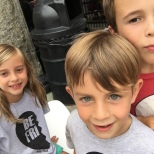 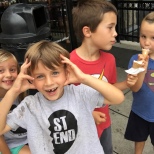 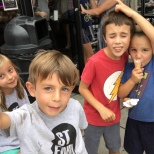 To make up for traumatizing Rosie during Spud, I treated her to JP Lick’s doggy ice cream.

Normal people would call it a day now and go home for a nap, but I think we all know we’re not normal people. We hugged the Campions goodbye and headed to…

We hadn’t actually planned on a third play date, but my friend Rosa happened to text me on our way home and we still had an hour to kill before dinner. People who ask me how I do it don’t understand that getting out of the house is my #1 secret to “doing it” (not that it, pervs); hanging out in the house is the kiss of death. Plus, I love Rosa and we knew we’d have fun with her kids, Mira and Ezra.

One of my favorite things about JP is that all the families have different nicknames for the various playgrounds. We have the Sand Playground (Brewer St), the Brinkler (Sprinkler) Park Playground (Green St), the Tot Lot (Rossmore-Steadman), and the Brown Playground (Williams St by the train tracks). On our way to the Brown Playground, we ran into my nephew, Ryan, who came and joined us. This play date keeps getting better!

At the Brown Playground, the kids played in the giant brown structure (hence the name), on this rickety giant metal seesaw thing which is a total death trap, and then got pushed on a tire swing by some dad that Rosa knows who’s apparently some kind of Super Dad/saint who puts us all to shame. I believe that in addition to being a total hands on dad, he’s also a rocket scientist/genetic researcher/cancer doctor and rescues kids in India or something equally impressive. Rosa and I discussed this while looking at our phones on a bench while Super Dad pushed his kids and ours on the tire swing, and made up fun swinging-related games while doing so.

After play date #3, we were pretty exhausted. Unfortunately, RyRy only had enough room to carry two people, and somehow I got the short end of the stick.

Thank you to everyone who helped make our day action-packed as fun as it was. We slept well that night/the rest of our lives.

It’s getting to be crunch time. What do we need to make sure we do before the summer’s over?