Today we had the pleasure of having my good friend Ariane and her three wonderful sons, Ellis, Ian & Owen over. We had planned on going to our home-away-from-home, the zoo, in the morning but we got rained out, so we were relegated to the Toy Pit. Ian brilliantly came up with a new game of putting the Trash Pack guys on a remote control car and seeing if they could hang on (they can’t), Hazy visited Dr. Ariane with a bad case of “everything,” and Hazy put on a puppet show which mainly involved shooting the audience with green balls out of a pig’s mouth and yelling, “poop!” to the audience’s great amusement. 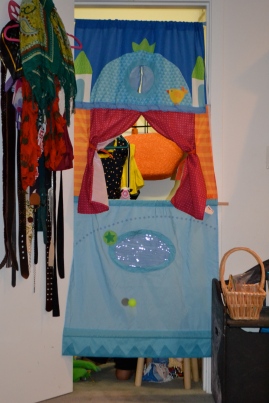 George and Owen took naps after this, and Owen napped in Hazy’s bed. Proving she’s my daughter, Hazy expressed concern about Owen drooling on her pillow. Thankfully, Owen sleeps without a pillow. Phew. Finally, the rain had stopped, the boys work from their naps, and we hit the zoo. 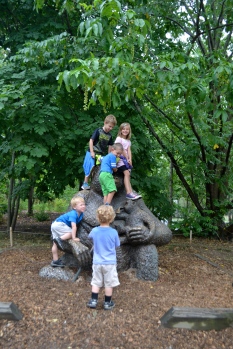 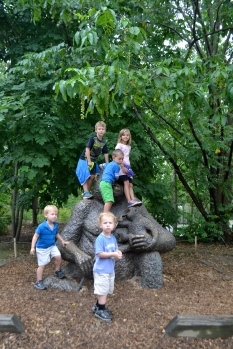 Can you spot the difference between these two pictures? (Hint: in one, Ariane told Owen the peacock was behind him.)

We did not get to feed the budgies (suck it, zoo, just saved $9!), but we did get to get another set of 51¢ pennies for our overpriced oblong penny collection. After the zoo, we had dinner and then turned on the bubble machine. Bubble machine: kids as DNC balloon drop: Bill Clinton. They went nuts. 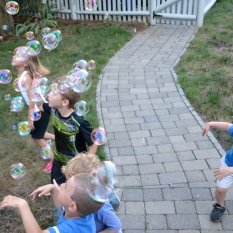 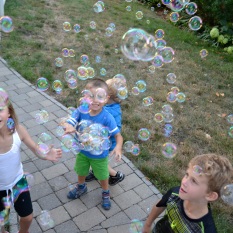 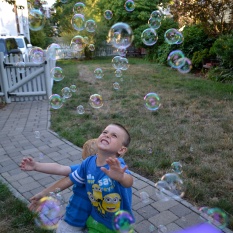 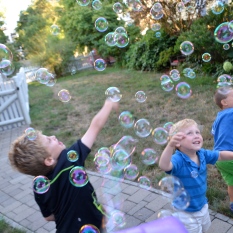